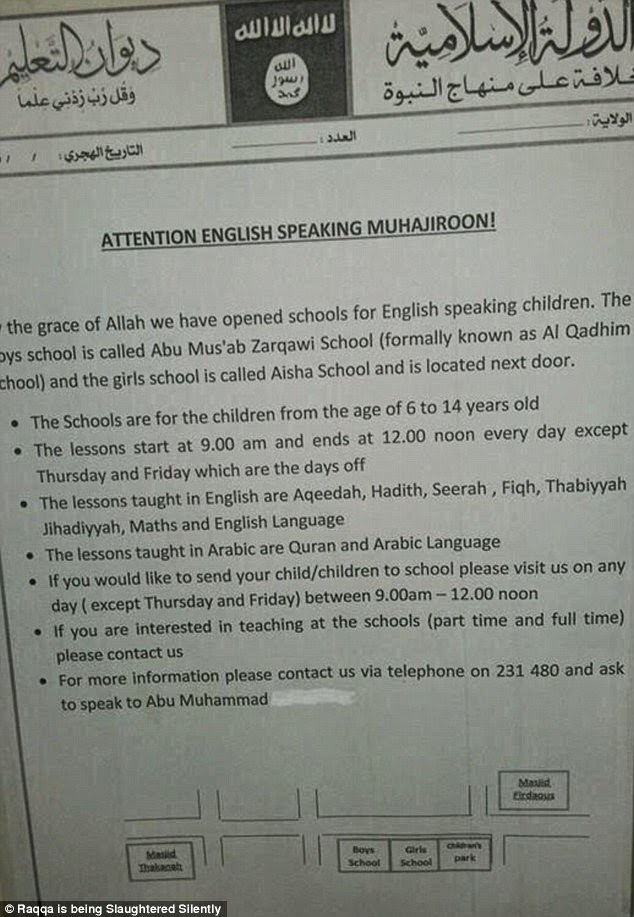 Militants fighting for the Islamic State in Syria are seeking to attract more foreign recruits by opening two English-language schools in the terror group’s de facto capital city.
Activists working undercover in the ISIS stronghold Raqqa uncovered plans for two schools – one for boys and one for girls – where most lessons will be taught in English, not the local Arabic dialect.
The plans are just ISIS’ latest attempt to build establish a fully-functioning state within the vast swathes of Syria and Iraq it controls through a campaign of rape, massacre and brutal oppression.
Last summer the terror group declared the territory a so-called caliphate and said it as the duty of all Muslims around the world to live under the regime. Since then tens of thousands of foreigners have done just that, with English becoming a lingua franca among the militants and their families.
Details of the two new English language schools were revealed by a local activist named Abu Ibrahim Raqqawi, whose group ‘Raqqa is Being Slaughtered Silently’ operate undercover in the city to expose ISIS atrocities and report on local developments in the terror stronghold.
He uploaded a photograph to Twitter showing a typed-poster that had been put up informing local fighters that the two schools are soon to open.
The poster reads: ‘By the grace of Allah we have opened schools for English speaking children. The boys school is named Abu Mus’ab al-Zarqawi School (formally known as Al Qadhim School) and the girls school is called Aisha School and is located next door’.
It then goes to say that the schools cater for children aged between six and 14, and lessons are run between 9am and midday between Saturday and Wednesday. The children therefore have Thursday and Friday as a weekend.
Religious lessons, Mathematics and English Language are all taught in English and take up the majority of the day, although a minority of lessons, such as the teaching of Arabic Language and the reading of the Koran are conducted in Arabic.
The poster gives a phone number for parents to call if they are interested in enrolling their children and instructs them to ask for a militant named Abu Muhammad.
The purpose of opening English language schools in Raqqa is two-fold – firstly to stop English-speaking families leaving the territory over concerns about their children’s education, and secondly to raise a generation of bilingual young men to continue the ISIS reign of terror for years to come.
The news comes as Syrian Kurdish forces advanced against Islamic State fighters in two separate attacks in northeastern Syria near the Iraqi border on Sunday, an organisation tracking the war reported, compounding recent losses for the militant group in Syria.
The Kurdish YPG militia has been one of Islamic State’s toughest enemies in Syria and last month flushed the group out of the town of Kobani with the help of U.S. and allied air support and Iraqi Kurdish reinforcements on the ground.
Hasaka province in the northeastern corner of Syria is strategically important in the fight against Islamic State because it borders areas controlled by the group in Iraq.
In an attack backed by U.S.-led air strikes, the YPG advanced to within 3 miles of Tel Hamis, an Islamic State-controlled town 22 miles southeast of the city of Qamishli, Kurdish official Nasir Haj Mansour said.
The YPG had decided to launch the attack after Islamic State reinforced its positions in the area with foreign fighters.
It is the latest example of coordination between the U.S.-led alliance and the YPG in the fight against Islamic State, which has seized wide areas of Syria and Iraq and declared them part of a cross-border ‘caliphate’.