You are here: Home / MidEastGulf / 12-year-old Islamic State escapee was trained to kill his own parents 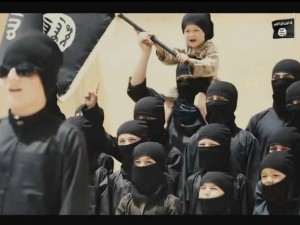 CNN describes a 12-year-old boy nicknamed “Nasir” as “one of the lucky ones,” because he managed to escape from the Islamic State’s suicide bomber program. He says some of his fellow trainees were as young as 5 years old.

The Islamic State has stepped up its use of child soldiers, including captive children like Nasir, who has now been reunited with his mother at a Yazidi refugee camp in Kurdistan. Nasir said there were sixty children in his “class.”

Most of his training consisted of brainwashing tactics, with ISIS militants teaching the kids about jihad and claiming to love them more than their own families, and telling them ISIS was now their only family.

Physical and mental abuse of the young trainees is common. A United Nations report cited by the UK Independent said ISIS rounds up large numbers of children from areas it controls, uses flogging, torture, and rape to punish them for disobedience, and executes deserters.

Among the horrors documented in the U.N. report are tribes in the Anbar province of Iraq cooperating with ISIS by conscripting children from their families, “recruitment drives” that bagged nearly a thousand children at a stroke, and the mass execution of child soldiers who ran away from the front.

According to Nasir’s testimony, the so-called “cubs of the Caliphate” were told “our parents were unbelievers, and our first job was to go back and kill them.”

Nasir saw his chance to escape after he was used along with numerous other children in an Islamic State propaganda video touting the fearsome virtues of the “Al-Farouq Institute”—the primary training facility for child soldiers—in the terror state’s capital of Raqqa. As CNN describes the video, a line of brainwashed children was made to chant about jihad while their “instructor” promised they would soon be “at the front lines of the fight against the non-believers.”

The “Al-Farouq Institute” is not the only place such horrors are perpetrated, however, as CNN discusses an 11-year-old boy who survived a similar training program in northern Iraq. He did not exactly escape; the ISIS savages broke his leg in three places when he refused to join suicide-bomber training, then let his grandmother carry him home, because he was of no further use to them.

Another escaped child soldier, profiled by NBC News last August, was obliged to hop around his apartment on one foot, because his wheelchair did not fit through the doors. He needed a wheelchair because ISIS chopped off his right hand and left foot, to punish the 14-year-old for disobedience.

Nasir was able to flee to safety behind Kurdish lines, facing a final, terrible obstacle in his bid for freedom: there are enough ISIS child bombers coming their way to make them shoot first and ask questions later.

“Many times when we are facing ISIS, we see the children at the front line and they’re wearing explosive vests. They are brainwashed,” a Peshmerga commander explained. “We don’t know when they approach our positions whether they’re really escaping or they’ve been sent to kill us. When they make it through our lines they kill our fighters. It’s an unbelievably hard decision. You don’t know what to do because if you don’t kill them they’ll kill you.”

The Islamic State’s brainwashing tactics are chillingly effective, with even some young escapees displaying signs of ongoing psychological damage, such as a child who refuses to let anyone cut his hair because ISIS told him it was forbidden. Most of them are understandably reluctant to be named in the media or photographed. Yazidi activist Kahlid Nermo Zedo told CNN some of the recovered children suffer seizures when they hear the name of the Islamic State.