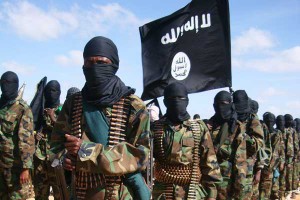 Twelve Somali government soldiers have been killed in an attack by Al-Qaeda-affiliated Al-Shabaab militants, officials and witnesses said Saturday.

The attack occurred early Friday at a military base in the Yaq-Bariweyne area about 100 kilometres south of the capital Mogadishu.

“Several of the militants were also killed during the fighting,” said Mohamed Adan, a Somali military official.

Witnesses said the militants overran the camp, looted military supplies and then left.

“The Al-Shabaab fighters took control of the camp and looted everything. The commanders addressed residents of the village, they said the rule of Sharia law will be back soon,” said Abdirahman Somow, a local eyewitness.

“The Mujahedeen fighters carried out a dawn raid on the Yaq-Bariweyne military camp, nearly fifteen apostate soldiers were killed and a huge amount of military supplies have been taken,” the Al-Shabaab also said in a brief statement posted on jihadist websites.

The Al-Shabaab , who have recently lost a string of key bases in the face of an offensive by the African Union’s AMISOM force, has stepped up counter attacks involving hit-and-run raids on several bases, including an attack on an African Union camp earlier this month that left at least 50 dead.

The Al-Shabaab is fighting to overthrow the internationally backed government in Mogadishu, which is protected by 22,000 AMISOM troops from Burundi, Djibouti, Ethiopia, Kenya and Uganda.