You are here: Home / Africa / 12 dead in strike on Kenya hotel 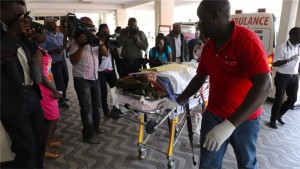 An attack on a hotel in northern Kenya on Tuesday left 12 people dead and four others wounded, a Kenyan government official said.

The target was the Boshari Hotel in the town of Mandera, on the border with Ethiopia and Somalia, and all of the people killed were foreigners.
No one has claimed responsibility for the attack, but officials said they believe the jihadist group Al-Shabaab was responsible.
The group has been behind some of the worst violence in recent years in and around Somalia.

This attack is very similar to other recent attacks in the region that targeted foreigners and is the third such attack in less than a month.
Edwin Kuria, a Mandera senior administrator, said the attackers used a hand grenade and an improvised explosive device to open the security gate.
They forced their way into the hotel and opened fire on people inside. Eyewitnesses say there were approximately eight to 10 attackers.
Security services took one hour to get arrive to the scene, which is in the center of the town.
cnn.com