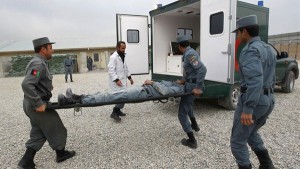 At least a dozen Afghan police officers were killed in a series of insurgent attacks on checkpoints in the country’s southern Uruzgan province, an official said.

Roshan added that pitched battles are still ongoing in the area and that government reinforcements have been deployed.

The current confrontation is so intense, Roshan said, that the corpses of both police officers and insurgents killed in the battle have been laying in open ground with no way to safely recover the bodies.

Elsewhere in Afghanistan, at least 10 insurgents were killed by government forces in the northwestern province of Badghis near the border with Turkmenistan, an official said.

Mirwais Mirzakwal, spokesman for the provincial governor, said on Wednesday that the operation in the Bala Murghab district near the Turkmen border was still ongoing.

Mirzakwal said his government had “done our best to provide security along the border.”

Mirzakwal added that last year Turkmen authorities started building a fence along the border with Afghanistan after a Taliban attack in which three members of the Turkmen security forces were wounded.