You are here: Home / MidEastGulf / 118 Killed in Iraq as fears for Falluja residents grow 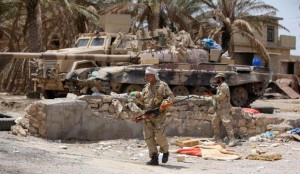 Life in Falluja is becoming increasingly difficult. Supplies are becoming scare, and the militants have confiscated identity papers, among other tactics, to force residents to stay. The Iraqi Commission for Human Rights believes that the militants may resort to mass murder as government forces draw closer. They are also using the remaining population as human shields. Meanwhile, Deputy Prime Minister Saleh al-Mutlaq urged residents to fight back.

U.S. President Barack Obama warned the Iraqi government that the U.S. military will not have a supporting role in operations that involve Iranian military forces. He stressed that the participation of Shi’ite militia groups is particularly troubling.

At least 118 were killed in violence or due to the situation in Iraq. Another 18 were wounded.

Twenty civilians died of exposure while trying to flee militant rule in Shirqat.

Eleven civilians were killed in airstrikes in Falluja.

In Raqqa, a booby-trapped building exploded, killing five security forces, including an Awakening Council leader, and wounding nine more. Six militants were killed in the attack. The militants had lured the personnel away from a police station.

Seven security personnel were killed and four were wounded in a suicide bombing in Baiji.

In Mosul, militants executed a television cameraman. Thirteen militants were killed in an airstrike.

Twelve militants were killed in Baghdadi.

In Saqlawiya, seven militants were killed.

An airstrike in Hawija killed a militant leader.

In Garma, an airstrike killed another militant leader.

Militants were killed during airstrikes in Daquq.