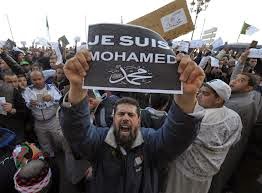 Ask people in Northern Iraq, Syria, Libya or Northern Nigeria and you will come across so many narrating harrowing tales of places of worship being torched, people being crucified and regional minorities — be they Shiites, Coptic Christians or Yazidis — being indiscriminately slaughtered.

What to say of narrations or eye witness accounts, the web has no shortage of media content where self-proclaimed champions of Islam and the so-called guardians of the Islamic faith take pride and display horrific acts of torture and slaughter.

It is so painful that all these atrocities are being committed in the name of God, who says in the Holy Quran:“And were it not that Allah checks the people, some by means of others, there would have been demolished monasteries, churches, synagogues and mosques in which the name of Allah is much mentioned” (22:40).

And then He says about the believers, the Jews and Christians:“Lo! Those who believe and those who are Jews, and Christians, and Sabaeans — whoever believeth in Allah and the last day and doeth right — surely their reward is with their lord, and there shall no fear come upon them neither shall they grieve” (2: 62). “And thou wilt find the nearest of them in affection to those who believe (to be) those who say: lo! We are Christians. That is because there are among them priests and monks, and because they are not proud” (5:82).

Has not the time come for the Muslims of the world to unite in demanding an end to atrocities being committed in the name of their religion and demand from their governments to fight all militants for it is not only a moral obligation but a religious duty as well to fight for the oppressed.

It is indeed shameful that the members of the Organisation of the Islamic Conference (OIC) that represent the Muslims politically, could not even muster a joint military force to protect the Bosnian Muslims during the Balkan massacre and it was the US and European States that came to the rescue of the Bosnian Muslims.

It is time for the states that have a Muslim majority to behave differently andmuster strength and courage to lead a transnational military response to Islamic State (IS) actions. A response thatis definitive and purposeful in that itwipes out all ISand Boko Haram fighters and rids the world of these killing machines that act as God and are tarnishing the name of Islam. After all, whatever abhorring and disgusting actions ISand Boko Haram take are taken in the name of Islam, contrary to its teachings.

Concurrently, there should also be acatharsis in all these states, which would lead them to the conclusion that religion is between man and God, and all forms of compulsion ultimately leads to a violent society. This catharsis will lead Saudi Arabia and other states where the clerics have the final say in politics and morality, and who police the private lives of their citizens, to change their internal policies.

Such a change they will surely conclude as absolutely necessary to rid their societies of the attitudes that disallowdissent. Disallowing dissent leads to oppression, which ultimately evolves into a violent societythat tries to suppress human liberty through the use of force. Evidence has put it beyond doubt that militants and terrorists are the able children of radical ideologies and, therefore, need to be tackled through a complete reformation of the thought process.

Dissenting opinion is the beauty of society and these countries need a big dose of this medicine. Both Saudi Arabia and Iran need to rise to the occasion and think beyond sectarian lines as the stakes are too high. One test is the religion both claim to serve.The clerics who have had a taste of power in these states will no doubt resist but the people and their rulers will have to join hands to bring about this change so that their religion is purified at its roots and the scourge ofviolence is eliminated. Inaction is not an option.

It is time to follow words with action. If countless people are fed a wrong and violent message in the name of the religion of peace and these governments remain silent or lethargic they will be held answerable to their Creatorand willhave no excuse. Waiting for the west to intervene and clean our laundry is awful.

Just yesterday,US President Obama rightly said that “These terrorists are a threat first and foremost to the communities they target.” Should we not therefore fight back and eliminate this threat to our communities? The global designs of these terrorists require that their battles ultimately become a war between Islam and the west. This should never be allowed to happen as the spread of the religion will be through reason and a change of heart, not through oppression or violence.

While the general body of Muslims proclaims Islam to be “the religion of peace”, it is time to follow words with action by leading the political and military effort to combat all militant groups that are discrediting Islam.