You are here: Home / Africa / 11 killed in suicide bomb blast in Far North Region of Cameroon 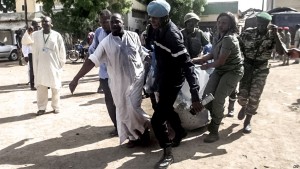 At least 11 people were killed and many others injured in a suicide bomb blast Friday morning in the Far North Region of Cameroon, one military source told Xinhua.

According to the source, one girl aged around 13 years broke into a house in Kolofata, a town neighboring Nigeria at around 6 a.m. local time (5 a.m. GMT) before she detonated the bomb attached to her, killing herself and 5 others, wounding many.

The source said five people who were seriously injured died later in hospital, bringing the total death toll to at least 11.

No organization has claimed responsibility for the blast, but it is widely believed Nigerian Islamic sect Boko Haram is behind it, the source said.

Since July this year, suicide bomb blasts have become common in the Far North Region of Cameroon, the main target of Boko Haram.