You are here: Home / Mediterranean / 11 killed in fresh Libya clashes 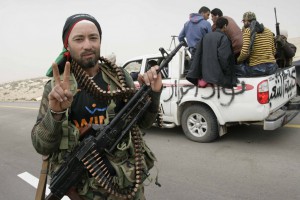 Ten soldiers and a militiaman were killed in fresh violence in conflict-strewn Libya, security and medical sources said Thursday.

They said 10 soldiers were killed and 36 wounded in clashes Wednesday in the eastern city of Benghazi, birthplace of the 2011 revolt that ousted longtime dictator Moammar Gadhafi.

And a fighter with Fajr Libya, a coalition of militias which opposes the internationally-recognized government, was killed Thursday near the coastal city of Misrata, in an attack claimed by ISIS.

Since Gadhafi was toppled and killed, battle-hardened former rebel groups armed with heavy weapons have been carving out their own fiefdoms.

When the Fajr Libya alliance took Tripoli last year and set up a rival administration, both the recognized government and parliament took refuge in the east near the border with Egypt.

ISIS jihadis have exploited the chaos to move in and gain ground.