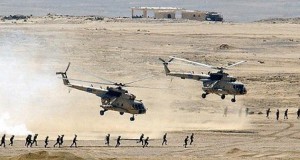 Egyptian army killed 11 militants in the country’s volatile North Sinai region on the eighth day of a military campaign during which a soldier also lost his life.

He said in a statement that a soldier was killed and another was injured after a bomb exploded during the raids.

Five vehicles were also destroyed during the campaign.

Egyptian army recently started a major campaign in the cities of Rafah, Sheikh Zwayed and Al-Arish against militants.

The North Sinai region has witnessed many violent attacks by militants since the January 2011 revolution that toppled the president Hosni Mubarak.

The attacks targeting police and military increased after the ouster of Islamist president Mohamed Morsi in 2013 by military following massive protests against his rule.

More than 600 security personnel have been reported killed since then.