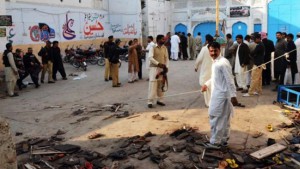 Eleven people were injured in a grenade explosion when they came out of the Jamia Trenz mosque in Shopian after offering morning prayers.

The ‘Nimazis’ (those who offer daily Muslim prayers) discovered an inverted metallic tumbler in the mosque compound. When one of them tried to turn the tumbler straight, the grenade kept under it exploded,” a senior police official told IANS here.

On Wednesday, four people, including an officer of the Jammu and Kashmir police, two CRPF troopers and a civilian, were injured in Khanyar area here when militants hurled a grenade at a patrol party of the security forces.