You are here: Home / Africa / 11 dead in fresh violence in Eastern Dr Congo 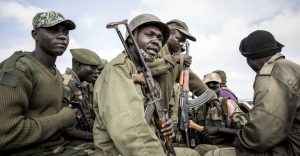 At least 11 people were killed by an armed group in eastern DR Congo, sources said Thursday, bringing the troubled region’s death toll to at least 70 since the start of the week, according to an AFP tally.

Eleven miners in the gold-rich territory of Djugu, in the northeastern province of Ituri, were killed early Wednesday by a local group called the FPIC, Mungwalu district mayor Jean-Pierre Pikilisende told AFP.

The Kivu Security Tracker (KST), a respected NGO that monitors violence in eastern DR Congo, said 12 people had been executed.

Pikilisende said the militia had come to take control over the area, whose gold is mined by poor artisanal diggers.

Ituri and neighboring North Kivu province have been placed under a “state of siege” — a government attempt to stem escalating violence by replacing civilian officials with senior army or police officers.

The journalist said 21 died in Tshabi and another 32 in Boga, where a camp for displaced people was targeted.

Eighty-four shacks in the camp were torched, as were eight stores in nearby Boga, the reporter saw. Fifteen homes were burned in Tshabi.

A number of villagers, including at least four women, were kidnapped.

The identity of the attackers remains unclear, as the massacres took place in an area notorious for ethnic tension and the Allied Democratic Forces (ADF), an armed group that has been linked to the so-called Islamic State.

The ADF has the bloodiest reputation of the estimated 122 armed groups that roam eastern Democratic Republic of Congo (DRC), many of them a legacy of wars more than a quarter-century ago.

Five other people were killed early Tuesday, and several others, including children, are missing.

On Wednesday, an old man was beheaded in the village of Bulire, near Boga, and two people went missing, a local administrative official said.

As of Friday, the KST estimated that at least 1,228 civilians have been killed in Beni territory of North Kivu alone since November 2019, when DRC’s armed forces launched a crackdown, splintering the ADF into smaller groups.