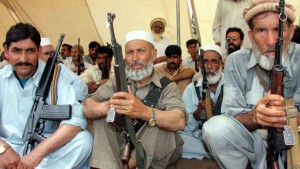 Around 20 members of the pro-government Toheed-e-Islam militia or “lashkar” were captured by the Taliban affiliated Lashkar-e-Islam militant group on Friday, who dumped five bodies in the Qamar Khel area of Khyber district on Monday.

The bodies of six more militiamen were found in the same area Wednesday, a senior government official told AFP.

“All dead bodies are bullet-riddled. We also found hand-written notes by Lashkar-e-Islam from near the dead bodies claiming the killings,” he said.

Shamsul Islam, another senior official, confirmed the incident and said the authorities were looking into reports of another three more bodies being found.

Khyber is one of Pakistan’s seven semi-autonomous tribal areas which have been at the forefront of an Islamist insurgency that began after Taliban and Al-Qaeda fighters fled across the Afghan border following the US-led invasion of that country.

Radicalised tribesmen carried out a campaign to eliminate hundreds of tribal elders, the traditional backbone of their society, in order to wrest power for themselves. They later formed the umbrella Tehreek-e-Taliban Pakistan (Pakistani Taliban) in 2007.

In response, Pakistan’s government recruited tribesmen to form pro-government militias, in addition to waging several military offensives with its well-funded and powerful army.

The military is currently carrying out major operations in Khyber and North Waziristan tribal areas, while the remaining five districts are relatively calm.

Many analysts believe the Pakistani Taliban’s capacity to mount major attacks has taken a serious hit following the latest offensives.