You are here: Home / Senza categoria / Egypt:  the nuances of writing a constitution
La seconda settimana del prossimo gennaio il progetto egiziano di Costituzione sarà sottoposto a referendum pubblico. Fino ad allora il progetto verrà accuratamente esaminato, sezionato, e valutato.
Anba Pola, vescovo di Tanta, rappresenta la Chiesa ortodossa copta nel Comitato che ha scritto il progetto di Costituzione, in questa intervista spiega le difficoltà incontrate durante la redazione.
There has been recent debate over claims made by a number of members of the Committee of the Fifty that the wording of the Preamble of the Draft Constitution underwent a last minute change before printing the draft, thus changing the wording approved by the committee. It was claimed that “civil rule” was changed into “civil government”. How does this affect the draft?
First, we should not turn a wedding into a funeral because of one word. We are all celebrating; why call the bride ugly? This whole issue has been overblown by the media.
The explicit mention of Egypt as a ‘civil State’ was never made in previous constitutions because this was then an implicit given. Once Egypt experienced a year [from June 2012 to June 2013] under Islamist rule by the Muslim Brothers (MB), which Egyptians overthrew last July, the fact that the country might come under the power of non-civil forces became all too real. It became obvious then that the Constitution must stipulate the civil nature of Egypt. Since the Islamists in the committee objected to that, discussion of the issue was pushed—together with a few other highly controversial issues—to the last minute in order to avoid a climate of conflict.
It was finally decided to mention “civil rule” in the Preamble, and also to define sharia, Islamic law which the Constitution stipulates as the main source of legislation, to be the historically proved, unambiguous interpretations of sharia. We also decided that it was the responsibility of the Supreme Constitutional Court, not any religious authority, to define shariain the legal system. The Church and the seculars were adamant that sharia should not be left to questionable interpretations, and we succeeded in that.
Since national interest and inclusion of all Egyptian sectors is our top priority, we were at one point willing to forego the mention of “civil State” in the Preamble, since the Constitution in its entirety secures the civil nature of the State. However, the Mufti suggested the phrase “civil rule” to which everyone agreed.
On voting day the head of the committee, Amr Moussa, read the text as “civil government” and explained that it meant civil rule. This brought about murmurs among the members, but they voted for it. When the final draft was printed after the vote, the phrase read “civil government”. Mr Moussa was under pressure to edit the phrase, but he decided to leave it as is. 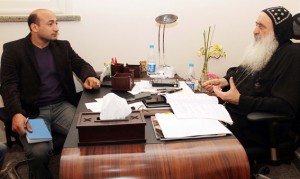