You are here: Home / Senza categoria / U.S. plans to separate Kurdistan from Iraq 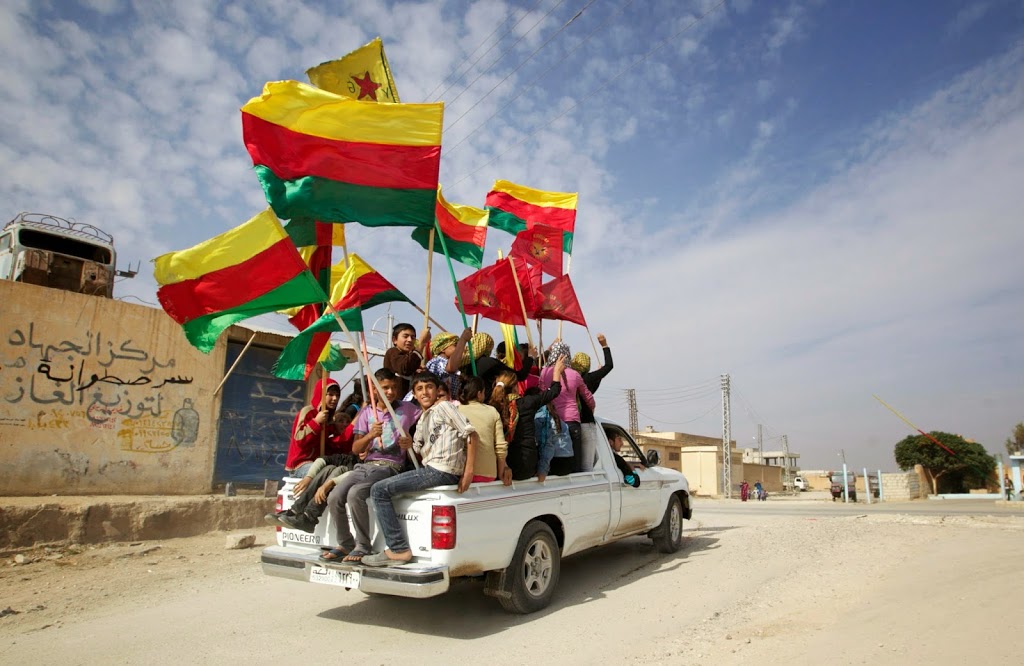 The Middle East faces the vicious circle of US-incited changes of regimes and the established borders of Arab states. Perhaps Americans are guided by the view expressed four decades ago by former Israeli Prime Minister Golda Meir: «Except for Egypt and Israel, which are the true states, the rest of the Middle East – it’s just tribes waving their flags».

The plundered Libya has ceased to be a unified state, Yemen is divided, and the integrity of Syria and Iraq is threatened. The Islamic State, a new product of US diplomacy, has emerged to control the territory larger than Great Britain. It is preparing an invasion of Lebanon and Jordan. Its further plans include establishing control over Mecca and Medina. The organization has become a much bigger threat than any another terrorist group.

At present a 25-thousand strong joint contingent of Iraqi army and Kurdish armed formations is preparing to free Mosul from the Islamic States militants. An operation to liberate the second largest Iraqi city with the population of two million is not just an anti-terrorist action – it’s an operation of large-scale in a full-fledged war.

And it’s not about achieving a military victory only. Iraq defends its very national statehood. The US Afghanistan experience provides a warning. Mojahedin got US arms to fight the USSR. Now they have become the Taliban. After 13 years of US and NATO occupation the civil war is not over, the Taliban is on the way to seize power. It is all being repeated in Iraq. Few believe that the US will win.

The US-planned military operation with the mission to defeat the Islamic State has three phases:
– to deliver air strikes against the Taliban positions;
– to provide training to Iraqi government forces and Kurdish self-defense units, and, perhaps, some Sunni tribes.
– to eliminate Islamic States forces in Syria – the final objective of the campaign.

According to the Pentagon, it will take three years to implement the plans. Somebody else will have to accomplish the mission as Obama is leaving in 2016. Before his tenure is over he can lay a mine under the Iraq’s statehood. That’s what his Iraqi Kurdistan policy is aimed at.

There is no united front against the Islamic State. The forces confronting the group include the US-built coalition, government forces in Syria and Iraq, as well Kurds formations in these two countries. Kurds realize well that under no circumstances will jihadists accept the idea of Kurdistan’s independence or its autonomy within the borders of the state they want to create.

Being formally an autonomous entity in the north of Iraq, the Kurdish independent state has been in existence for many years, practically since the overthrow of Saddam Hussein in 2003. Under George Bush Jr., the United States became a guarantor of Iraqi’s territorial integrity within the borders that existed at the time. Back then Washington was not interested in the partition of the country. President Obama views things differently. With him in power the US withdrew from Iraq to deviate pretty soon from its commitments as an ally.

Washington is concerned over the growing rapprochement between the Shia leadership of Iraq and the government of Iran, a Shia state.

This prospect frightens it more than the emergence of terrorist monster, such as the Islamic State, on Iraqi soil. Again, it makes a mistake by thinking that the «Kurdish project» it sponsors will undermine the position of Iran. Perhaps, to the contrary, by playing the Kurdish card the US President strengthens Iran.

If Kurdistan becomes independent, the Shia Muslims will enjoy vast support to increase the Iran’s influence inside the country. Political opponents keep on asking Obama why he has wasted the opportunities produced by the victory over Saddam Hussein to make the efforts requiring huge funds and great casualties go down the drain.

Has it all been in vain? The US plans to make Kurdistan secede are not supported by neighbors. The Arab world believes that the Obama’s Kurdish policy leads to the appearance of the «second Israel» in the Middle East. The Arabian Peninsula monarchs are afraid that the peshmerga (Kurdish self-defense armed formations) will do away with the Islamic State threat and then turn the arms provided by Washington against Baghdad. Such development of events will result in the partition of Iraq.

The fears are grounded. The US scenario of anti-Islamic State campaign does not envision the support of Iraq as a whole state. Fragmentary aid is to be rendered to three groups inside the country: pro-government Shia forces, Kurdish armed formations and Sunni tribes. The US cooperates separately with each of these forces trying to make them politically subjugated. At that the amount of military aid is well balanced and calculated. The strategy by itself lays down the basis for future internecine feuds.

It’s not without reason Saudi Arabia is going to erect a 1000-km long wall at the Iraqi border to prevent the spread of chaos from Iraq to the Arabian Peninsula. Saudis have no wish to participate in the war against the Islamic State. The wall is rather a publicity stunt than a fortification to prevent aggression. 20 Arab states met in Riyadh a few days ago to discuss the issue of providing military aid to Baghdad.

Saudi Arabia stands against the US-style partition of Iraq and it opposes the idea of independent Kurdish state. Riyadh believes that the recognition of Iraqi Kurdistan will split the governing coalition in Baghdad tipping the balance in favor of Shia Muslims close to Iran. In this case, the Islamic State will turn into one of two evils along with the pro-Iranian Iraq.

The emergence of Iraqi Kurdistan, being to large extent dependent of US comprehensive aid, is not acceptable to Turkey. The Turkey’s relationship with Washington has marked a low ebb recently. It has never been worse. The Kurdish issue is a burning national problem for this country. Turkey refuses to help Kurds in Iraq and Syria. It is ready to veto the unification of Kurds and flatly refuses the idea of establishing a Kurdish state. Some time ago Syrian Kurds announced the creation of their own administration in Western Kurdistan (a de facto Kurds-populated autonomous region in northern and north-eastern Syria).

In 2012 16 Kurdish political parties united under the umbrella of the Kurdish National Council to take the northern part of Syria under their control. The powerful Syrian Kurdish Democratic Union (the PYD) joined with the Kurdish National Council to form the Kurdish Supreme Committee. The Union has teeth and keeps up close ties with the Kurdistan Workers Party, a Kurdish rebel group operating in Turkey. Ankara wants its stance be taken into account as Washington builds its relationship with Kurds. Turkey calls for thorough assessment of possible repercussions resulting from possible partition of Iraq.

Criticizing Obama for foreign policy failures at the Chicago Council on Global Affairs, Jebb Bush, former Florida governor and the prospective 2016 presidential race runner on Republican ticket, warned that «everywhere you look, you see the world slipping out of control» in a speech that appeared to be a next step in a carefully choreographed rollout of a 2016 presidential bid.

Criticizing Obama’s foreign policy is an issue on the agenda. The United States has always been rather inconsistent in its Kurds policy. Washington supports the Iraqi Kurds while fighting the Islamic State, but it turns its back on Syrian Kurds. Washington uses Iranian Kurds to undermine the Iranian regime and Turkish Kurds to blackmail Ankara. For instance, the US threatens to transfer the US Air Force base in Incirlik to Erbil, the capital of Iraqi Kurdistan.