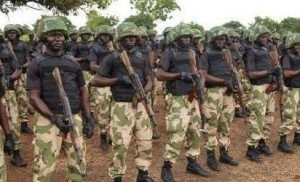 The Nigerian military has denied the reported attack on a military base in northern Nigeria.

ABC News reports Monday evening that Boko Haram fighters attacked a military base in Ularamu, and destroyed the compound.

The newspaper said after soldiers, yet to be accounted for, disappeared, residents picked up arms and stopped Boko Haram from overrunning their town.

“Locals fought the militants through the night until military reinforcements arrived on Monday morning,” it said.

However, the military has maintained that no soldiers were missing, but there were reports of searches being conducted to find the 107 missing troops.

Over 100 soldiers, including their commanding officer, were reported missing.