You are here: Home / Senza categoria / Sudan’s army and rebels both claim victory after fighting in Two Areas, Darfur 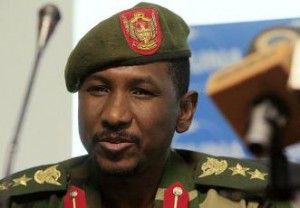 The Sudan Armed Forces (SAF) since last December, launched a comprehensive military campaign against the rebels of the Sudanese Revolutionary Front (SRF) who established their joint command in the Nuba Mountains in South Kordofan..
Rebel sources admit that SAF massed for this campaign significant number of troops, claiming they include former rebels who joined the government, and militias from Darfur and South Kordofan.
On Wednesday, SAF spokesperson Al-Sawarmi Khaled released two statements where he spoke about an ambush on a commercial convoy in South Darfur state and a rebel attack on Dalmai area in the Nuba Mountains. In a separate statement, he further announced a military assault on the SPLA-N positions in the Blue Nile.
Khaled said that Sudanese soldiers escorting a commercial convoy managed to repel an attack carried out by the fighters of the Sudan Liberation Movement (SLM) while they were in Fogo Diko area on the road connecting South and Central Darfur states.
He stated that the escort force repulsed the assailants and captured 14 vehicles. He added that the army chased the rebels who fled in direction of Kabkabiya in North Darfur and seized a truck loaded with three machine guns, captured a Land Cruiser vehicle and destroyed two others.
No rebel group released any statement on this attack. Also, it is not clear which SLM faction carried out the attack. The South Darfur state, however, is known for banditry, robbery and attacks on commercial convoys by armed gangs.
The Sudan People’s Liberation Movement- North (SPLM-N) spokesperson Arnu Lodi said a joint force from his group and the SLM group led by Abdel Wahid Al-Nur attacked Dalami town in the northern part of the troubled state.
Lodi said the attack started from six o’clock to midday stressing they withdrew after inflecting heavy causalities on the government forces.
“In the same time our artillery SPLM/A managed to shell the garrison of Umbrambitah to destroy the capacities of the regime army”, he further said in a statement extended to Sudan Tribune.
Conversely, SAF spokesperson from Khartoum said the army managed to repulse the attack on Dalami, adding that the shelling killed a number of women and children.
The Armed forces inflicted heavy losses on the rebels and destroyed a truck they had while the army chased the remaining rebels in a combing operation conducted after the attack, Khaled claimed.
The recent fighting between the Sudanese army and the rebels in El-Abassiya and Rashad areas in the South Kordofan displaced some 1000 people who are in need of food and shelter , said the government body, Humanitarian Aid Commission.
Speaking in the capital of South Kordofan, Kadugli the newly appointed vice president Hassabo Abdelahman reaffirmed that SAF will continue its military operations against the rebels, stressing that the current campaign is “the last option to establish security and stability in the state”.
He further renewed the government’s call for the SPLM-N and all the SRF groups to join the negotiating table in order to reach a final peace in the country.
On the other hand, SAF spokesperson said in a statement issued on Wednesday night that the Sudanese troops took the control of the strategic area of Malken which is the southern gateway of Ingessana Hills in the Blue Nile state.
Khaled said the army inflected heavy losses on the rebel SPLA-N without elaborating.