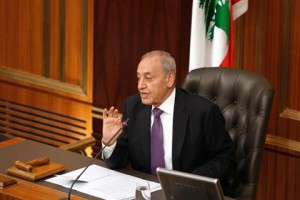 Sleiman “will not accept the isolation of Hezbollah or other political forces from any future Cabinet,” Berri told the local daily An-Nahar.
In response to a question regarding a proposal by the Future Movement-March 14 coalition that Hezbollah should appoint “friends” rather than party members as ministers, Berri said: “This is isolation in itself.”
Berri also outright rejected the Future Movement’s approach to resolving the Cabinet crisis.
“It is not a matter of questions and answers between the parties,” Berri said in reference to the list of questions put forward by the Future Movement.
“This is unacceptable,” he said, while stressing the importance of “dialogue” among the rival political groups “rather than cross-examination.”
The Future Movement has demanded answers to five questions centering mainly on the government’s policy statement, a March 8 demand for veto power and the rotation of ministerial portfolios.
Future MP Nuhad Mashnouq said Wednesday his bloc could not adopt a final stance on the 8-8-8 Cabinet proposal before it received clear answers to these questions. Mashnouq left for Paris Thursday for consultations with former Prime Minister Saad Hariri.
Berri insisted that the policy statement will only be discussed after the government has been formed and said Cabinet portfolios have yet to be tackled.
“President Sleiman and I have agreed to postpone the ministerial statement,” he said.
Meanwhile, Progressive Socialist Party leader Walid Jumblatt said he was doing his best to bring together the views of the warring political forces.
“It is important that a government is formed as soon as possible,” Jumblatt told the local newspaper As-Safir.
Intensified attempts to break the nine-month Cabinet stalemate have made some progress, a senior March 8 source said Thursday.
Sleiman and Prime Minister-designate Tammam Salam are determined to form a neutral Cabinet on Jan. 17 if no agreement is reached between the rival political factions on an all-embracing government, sources at Baabda Palace told The Daily Star.