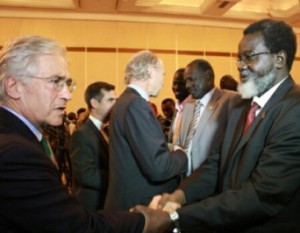 Negotiating teams of both sides earlier returned to face-to-face negotiations on Thursday after talks to reach a ceasefire deal stalled over the issue of freeing pro-rebel political figures who remain held in connection with an alleged failed coup attempt in mid-December.
The direct talks resumed Thursday after the Inter Governmental Authority on Development (IGAD) mediating team led by Ethiopian former foreign Minister, Seyoum Mesfin, travelled to Juba where it held “fruitful talks” with South Sudan President Salva Kiir and political detainees.
“There is indeed major progress on the issue of cessation of hostilities”, said the regional mediators following the two-day visit on 7 and 8 January to Juba.
However, there is no sign of progress in Addis Ababa beyond bringing together the two political actors, as sources close to the talks have dismissed IGAD mediator’s claim of progress.
During their meetings in Juba, the mediators presented a draft proposal on a cessation of hostilities agreement; however Kiir reaffirmed his government’s commitment to unconditional negotiations but refused to release the political detainees that the rebels demand.
Nonetheless, the mediators confirmed that the government and political detainees have committed to unconditional negotiations to end the ongoing hostilities that have claimed the lives over 1,000 people and forced tens of thousands flee their home.
After visiting the political prisoners, the detainees, according to IGAD mediators, said their status as detainees should not be an obstacle for the two parties to seal a ceasefire deal.
This has been welcomed by the regional bloc and seen as a key step forward to reaching an agreement on cessation of hostilities.
However an advisor to the rebel negotiating team in Addis Ababa told Sudan Tribune that the political prisoners have taken neutral positions because they don’t want to be considered as obstacles to the peace process and nor do they want to back government demands.
Different sources said president Kiir proposed to transfer the talks to the headquarters of the UN Mission in South Sudan (UNMISS) in Juba, in a way to allow the political detainees to participate in the negotiations and return to the prison where they are detained every night.
The rebel’s negotiating team has not yet commented on whether it will continue to insist on the release of political prisoners before entering into negotiations. But the they rejected to move the talks to Juba
The spokesperson for the US Department of State, Jen Psaki, On Wednesday told reporters that the discussions in Addis Ababa have made some progress on a draft agreement on the cessation of hostilities stressing that “disagreements remain on the issue of the release of political detainees”.
However an African official involved in the peace process told Sudan Tribune that there are also some disagreements on the cessation of hostilities, pointing that Juba demands to be able to impose its authority in the rebel held towns.
Juba also refuses a map detailing the positions the rebels claim they are controlling, the African Union source said, underlining that the two parties accepted that international observersbe commissioned with the monitoring of the cessation of hostilities.
UN agencies estimate that 250,000 people are displaced inside the country and thousands of refugees who fled to the neighbouring countries.
UGANDA MILITARY INTERVENTION
A rebel adviser who preferred anonymity told Sudan Tribune on Thursday that Uganda’s military intervention in South Sudan is also likely slow the peace process.
The source said rebels are not happy that a member of IGAD, the regional that is brokering the talks,has deployed troops in South Sudan.
Rebel negotiators are “most likely” to raise that issue in the coming days and might insist that Uganda withdraws its forces before any signing ceasefire agreement, he said.
Uganda has continued this week to deploy troops into South Sudan. Kampala says the reinforcement is to secure major installations such as the airport and not to become directly involved in the conflict, but rebels say the Ugandan troops are actively involved in the fighting.
A spokesman for the rebel delegation in Ethiopia, Brigader General Lul Raui Kong, on Wednesday accused Ugandan Air Forces of attacking rebel positions in South Sudan, an allegation Kampala denies.
Ugandan president Yoweri Museveni, who is considered as a close ally of Kiir, has warned Machar against rejecting the ceasefire offer, warning that failing to agree to ceasing hostilities would result in IGAD member states uniting to defeat him.
The rebels describe such statements as an indication of Museveni’s bias.