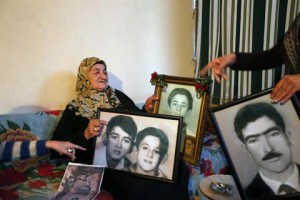 Lebanese Christian groups refused to comment on the death of the “Butcher of Beirut” when contacted by The Daily Star. Kataeb MP Sami Gemayel’s spokesperson said neither he nor the party, known in English as the Phalanges, had any comment on the news. The Lebanese Forces also said it had no comment when contacted.
Hezbollah spokesman Ibrahim Moussawi said his party had nothing to say on the matter.
Chibli Mallat, the lawyer who represented in a Belgian court the victims of the 1982 massacre that took place in the two Palestinian refugee camps in Beirut, ascribed the silence of the Christian parties to shame.
“Many actions they took during the civil war are similar to what Sharon did, and they actually did his bidding for him in the camps,” said Mallat, a professor of law at the University of Utah and Beirut’s Université St. Joseph. “They are not in a position to play a great moral authority.”
Sharon died Saturday aged 85 after eight years in a coma. He was widely reviled in Lebanon for his role in the invasion of the country in 1982 and the Sabra and Shatila massacre.
In September 1982, Israel’s ally, Kataeb leader Bashir Gemayel, was assassinated. Christian militiamen, under Israeli cover and led by Elie Hobeika, entered Sabra and Shatila camps and killed hundreds of Palestinian men, women and children. The attack was supposedly in retaliation for Gemayel’s assassination, which was actually carried out by Syrian Socialist Nationalist operative Habib Chartouni. Israeli soldiers sealed the entrances to the camps, and, at Hobeika’s request, fired illuminating flares at night so the slaughter could continue.
Mallat said Hezbollah’s lack of comment was because the group was under indictment by the Special Tribunal for Lebanon, and that they feared international justice.
He said that in light of the deterioration of Lebanon’s security, the death of Sharon and his role in the refugee camp massacres was not a high priority for Lebanese politicians.
“It would be bizarre if they would be attentive to the passing of Sharon,” he said, pointing to a number of recent car bombs in the capital and Beirut’s southern suburbs.
“A massacre that took place 30 years ago against people who have no political say in Lebanon is of no interest,” he said.
Mallat said fear kept Lebanese of all political stripes from openly discussing events that occurred during the war.
“The most important thing to come out of Sharon’s death is this extraordinary international buzz about justice for the victims of Sabra and Shatila” he said.
But with leaders getting away with mass murder every day in Syria and Lebanon, he added, Sharon has become somewhat of a “soul mate” to them.
As defense minister, Sharon led the invasion of Lebanon in 1982, which morphed into a long occupation. A U.N. investigation into the Sabra and Shatila massacres the next year concluded that Israel was responsible for the attacks, while the Israeli-run Kahan Commission the same year determined that Sharon was personally accountable.
The Middle East and North Africa director at Human Rights Watch, Sarah Leah Whitson, said over the weekend it was a “shame” that Sharon “has gone to his grave without facing justice for his role in Sabra and [Shatila] and other abuses.”
News of his death was greeted with delight in the Palestinian camps in Lebanon.
“He is a butcher, he is a killer, he is a murderer,” said Walid, a Palestinian residing in Shatila.
The mere mention of Sharon’s name in the Palestinian camps inexorably summons frightening memories of the massacre more than 30 years ago.
As Walid remembers it, the massacre began with crowds of screaming women running down the market, after which came the shells. He had been away from home and permitted to enter the camp after the carnage only to discover that his four brothers had been executed.
“There were many murderers like Sharon, but he stood out, his name was notorious,” said Abu Alaa, Fatah’s top representative in the camp. “His greatest crimes were committed in the camps here. He was a good killer. That is how we will remember him.”
But Milana al-Burji, an elderly Lebanese woman living in Sabra, said she was unsure if the death of Sharon should be greeted with delight. Her husband and three sons had been lined up and shot, she said as she showed The Daily Star their photographs hanging on the walls of her tiny flat.
Milana, 70, recalled how she had waited anxiously outside the camp while it was sealed off during the massacre. “The militiamen assumed everyone in the camp was Palestinian,” she said. “I was the first one to enter when it was over … I passed the bodies of dead people to reach those of my children and husband.”
“Sharon’s death doesn’t bring me peace,” she added. “I will never forgive him.”
Palestinians in the Beddawi refugee camp in north Lebanon also rejoiced at the news of Sharon’s death Saturday, with heavy celebratory gunfire heard throughout the area.
In south Lebanon, Ain al-Hilweh camp’s Palestinian inhabitants celebrated the news with gunfire, dance and revolutionary songs.
Several individuals handed out sweets to pedestrians and passing cars at the camp’s entrance, where Palestinian flags were raised.
Very few Lebanese ministers and MPs had something to say about the former Israeli minister’s death.
Social Affairs Minister Wael Abu Faour said that “with the passing of Sharon, there is now less evil in this world.” While MP Akram Shehayeb of the National Struggle Front said over the weekend the news was a “relief for the martyrs of the Sabra and Shatila camps and for the Arab countries.” – Additional reporting by Mohammed Zaatari.