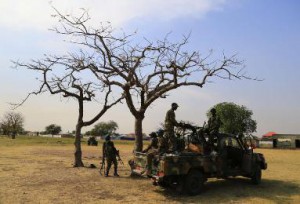 Gunmen reportedly attacked Lt. Gen. Johnson Gony Biliu’s convoy while he was conducting an assessment of the general security situation in areas around Upper Nile state capital. Malakal. Biliu is the commander of the SPLA’s sector II in Malakal.
According to sources, the incident occurred in an area between Anakdiar and Baliet county, some 54 kilometres east of Malakal town.
It remains unclear who masterminded the attack, and Sudan Tribune was unable to independently verify the claims as no official statement has been released from the office of the army spokesperson.
Calls by Sudan Tribune to the cell phone of the army’s spokesperson on Sunday were not returned.
Meanwhile, local officials claimed fighting had occurred in Doleib Hill, a former a mission station established by the American Inland Mission, located about 16kms south of Malakal town, on the northern bank of the Sobat River.
“Doleib Hill had fallen to the rebel control. The fighting between the two groups of soldiers divided over tribal allegiances and personal interests and connection broke out yesterday (Saturday) evening. It started at 9pm (local time) and stopped at around 10pm. It did not take long before it fell”, a government official told Sudan Tribune on Sunday from Malakal, adding that police and security forces had fled the area.
He also confirmed another attempt to take Baliet county by armed elements loyal to the former vice-president, Riek Machar.
“Our forces fought them today (Sunday) in Baliet. They attempted to advance but they were repulsed. Their intention is to overrun the area so that it becomes the opportunity for them to close the oil. This is where they are heading now, but I don’t think they will succeed. We have a huge force there and we are getting reinforcement tomorrow”, the official said.
In a separate interview with Sudan Tribune, Baliet county commissioner James Tor Monybuny confirmed that there have been several attempts by armed civilians from neighbouring counties – predominantly inhabited by the Nuer ethnic group – to take control of the area since Friday.
“There have been several attacks to create chaos in the area and harming the stability and national security of the country. There are people who do not value peace”, Monybuny said.
He claimed the group currently attempting to take control of the area has come from Nasir and the surrounding areas. Nasir is a known stronghold for hardline supporters of Machar and was the former deputy’s headquarters during the 1991 split.
Conflict erupted in South Sudan on 15 December after rival members of the Nuer and Dinka tribes in the presidential guards clashed in the capital, Juba.
President Salva Kiir, who hails from the Dinka tribe, has accused Machar, a Nuer, of orchestrating a coup attempt to overthow the government.
The violence has since spread throughout the country, including Jonglei, Unity and Upper Nile states.