T he civilian death toll in Yemen from a conflict lasting nearly two years has reached 10,000, with 40,000 others wounded, according to a UN official in the country 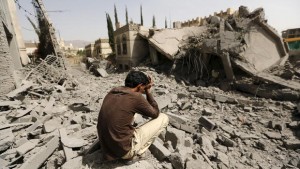 Jamie McGoldrick, from the Office for the Coordination of Humanitarian Affairs, said the figure is based on lists of victims gathered by health facilities and that the actual number might be higher.

The announcement marks the first time a UN official has confirmed such a high death toll in Yemen, the Arab world’s poorest nation.

The UN has previously reported that 4,200 civilians had been killed in the war.

The coalition waged an air campaign in March 2015 to restore the internationally recognised government that fled the country after Houthis seized the capital.