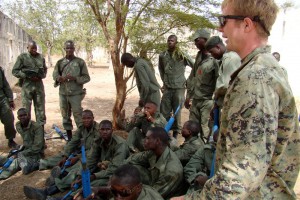 Despite years of intimidation by the violent extremist group Boko Haram, the people of southeastern Niger’s Diffa region had never held a summit to confront the threat — perhaps with good reason.

“One person could come here and kill us all!” Diffa’s prefect, Inoussa Saouna, told 75 village leaders assembled along with politicians and military commanders in the city’s pale blue-walled cultural center.

The group, best known for its kidnapping of more than 200 Nigerian schoolgirls in April 2014, has expanded from its base in northern Nigeria to threaten the region. It has menaced U.S. and European allies in west Africa, and leader Abubakar Shekau in March pledged its loyalty to Islamic State.

The Diffa meeting was a modest success not just for its mutually suspicious tribes but for a small team of fewer than 20 U.S. Special Operations Forces conducting an experiment that is part of President Barack Obama’s new counter-terrorism strategy.

The soldiers, who encouraged the meeting and helped provide a ring of security, do not go into combat, or even wear uniforms. They are quietly trying to help Niger build a wall against Boko Haram’s incursions and its recruitment of Diffa’s youth.

A Reuters reporter was the first to visit the detachment, which is among about 1,000 U.S. Special Operations Forces deployed across Africa.

In Chad, Nigeria, Niger and elsewhere, they are executing Obama’s relatively low-risk strategy of countering Islamic extremists by finding local partners willing to fight rather than deploying combat troops by the thousands.

The new approach, which Obama announced in May 2014, is far from being a silver bullet for the United States in its global battle against Islamic militancy. The indirect strategy appears to be faltering in the Middle East, where the United States has found few reliable allies on the battlefield in Syria. In Iraq, U.S.-trained and -equipped forces evaporated last year in the face of Islamic State’s offensive.

In Niger, there are signs of success against Boko Haram, although progress will likely be slow in a years-long effort, U.S., European and African officials say.

“For the region, this is going to be a struggle that’s going to be with them for a long time, not just in Niger, but elsewhere,” said Army Col. Bob Wilson, commander of U.S. Special Operations Forces in north and west Africa.

U.S. officials say they see predominantly Muslim Niger as worth helping. Relatively stable, but facing national and local elections in 2016, it is threatened by Boko Haram in Nigeria to the south, chaos in Libya to the north and an al Qaeda affiliate that operates in neighboring Algeria and Mali.

The U.S. soldiers in Diffa described their mission as a sharp and welcome pivot from the Iraq and Afghan wars, where virtually all of them served. The U.S. military has not said how long their presence will last.

“It’s a totally different approach to the problem set,” an American team sergeant said in an interview. The Special Operations soldiers cannot be identified by name under military ground rules.

In Iraq and Afghanistan, the United States also works with local security forces and leaders — but has wielded thousands of combat troops, drone strikes and pricey aid projects.

There is none of that in Diffa, a region that includes more than 200 villages along a 170-mile (273-km) stretch of the Komadougou Yobe river that marks the porous border with Nigeria.

In April, at Niger’s request, the American soldiers reinforced their small ranks on a drab, dusty compound with few amenities. Boko Haram was mounting a regional rampage and in February had launched significant attacks inside Niger for the first time.

Working alongside them is an unusual U.S. non-profit group, Spirit of America, that says it also aims to leave a light footprint. Under written understandings with the Pentagon, it buttresses U.S. military missions by providing local populations with small-scale assistance that would take Washington’s bureaucracy months or years to procure.

In Niger, the group has provided first-aid kits, Camelbak hydration systems and medical detectors for Niger’s military. It covered the $4,000 cost of the anti-Boko Haram summit.

“It’s providing them with enough to get through this critical phase,” said Isaac Eagan, Spirit of America’s field operations director. “It’s not fixing everything.”

Boko Haram has long used Niger for refuge and resupply, officials said. By the time the U.S. team sergeant and his men arrived, it had been luring young men from Diffa’s villages since the late 2000s, offering money and adventure, he said.

“We missed the recruiting portion of it,” he said.

One group of U.S. soldiers was training Niger military’s 3rd Antiterrorist Company. Another began to grapple with the civilian side of the problem, accompanying the nascent civil-military affairs unit of Niger’s military on visits to villages up and down the river.

Boko Haram has killed suspected informants and fear of the group persists. In June, the militants attacked two villages in Diffa, killing at least 30 civilians. Some died inside their mostly straw-thatched houses, which were set alight.

Sergeant Fougou Saley, chief of civil-military affairs for the Diffa region, said Boko Haram’s violent tactics have alienated much of the populace. But he said it still draws support from some of the Kanuri people, whose lands straddle northeastern Nigeria and southeastern Niger.

“In some places, some still have their heart toward Boko Haram,” said Saley, himself a Kanuri.

But African, U.S. and European officials say the group’s attacks in Niger have dropped significantly in the face of a regional counter-offensive this year by Nigeria, Niger, Chad and Cameroon.

But Barmou said he warned his superiors: “Always keep in mind one fact, that Boko Haram still keeps the ability to regroup very fast, conduct an action and disappear again.”

Voices were raised over whether former Boko Haram members who had been arrested and set free should be allowed to rejoin their communities. Most said no. When one speaker declared that captured insurgents should be executed, applause broke out.

The U.S. soldiers stuck to their behind-the-scenes approach. The team sergeant and a few others watched from the back of the room and did not intervene even when the gathering appeared to almost collapse in confusion after 20 minutes.

The soldiers say they feel more welcome in Niger than in Iraq and Afghanistan, where the long U.S. military presence, American missteps and mutual misunderstandings eroded tolerance.

“They’re fully supportive of getting Boko Haram out of here. It’s nice to be able to work with folks like that — that want the problem gone,” said the team sergeant, who was wrapping up his deployment and handing off to his replacement.

Less clear is how long the Americans will remain.

One thing they won’t leave behind is large-scale development projects like those in Iraq and Afghanistan. Years of reports by U.S. inspectors general documented wide-scale waste and corruption in those aid efforts.

“The biggest thing was not pumping money and projects into the region,” the team sergeant said. “Is it sustainable? Absolutely.”

Saley, his counterpart from Niger, said: “I would even like the Americans to stay for 40 years. … I don’t know what the American government and Niger government will decide.”