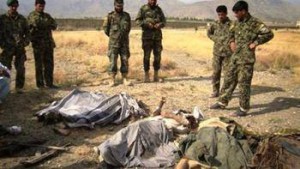 At least 100 Taliban militants have been killed in airstrikes in Afghanistan’s Kandahar province, local officials said on Saturday.

“The militants were gathered in Shurabak and had planned to capture the district but the airstrikes carried out by Afghan army killed 100 insurgents and injured 50 others,” Tolo news agency quoted officials from Kandahar police office as saying.

The insurgents arrived in the district from bordering areas. No civilians were injured or killed in the strike, the officials said.

Shurabak borders Pakistan where insurgents are known to be active and frequently target local security forces.