You are here: Home / Senza categoria / 10 takeaways from the fight against the Islamic State 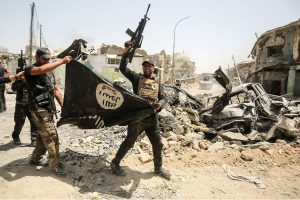 Nearly three years on from the Islamic State’s high water mark in the summer of 2015, there are several lessons that the United States and its allies can discern from the terrorist group’s meteoric rise to control large parts of Iraq and Syria to the loss of its physical caliphate late last year. The steady decline in ISIL’s fortunes is striking given the palpable fear its rise in the summer of 2014 sparked across Washington, when a common question circulating within the policy community was whether Baghdad itself might fall. Many of these takeaways will be relevant to U.S. policymakers as they attempt to prevent the group from reconstituting itself in the coming months, like reported by warontherocks.com.

Since the fall of Mosul and Raqqa, ISIL’s external operations have been sharply curtailed, and its communications have been greatly reduced (almost three quarters of the group’s media outlets have fallen silent since late last year). Absent its control of territory in Iraq and Syria, the Islamic State is now focusing primarily on trying to grow its eight overseas branches and inspire lone wolf operations abroad. It’s clear that denying the Islamic State its physical caliphate has been deleterious to the group’s operations. As such, denying the Islamic State control of physical terrain anywhere in the world should be job number one for those who want to see this group defeated decisively.

The Islamic State loves a vacuum. After rising again to prominence in the wake of the Syrian civil war and the political dysfunction of Iraq under Prime Minister Nouri al-Maliki, today the group is making its greatest inroads in troubled areas from the Sinai and Libya to Yemen and parts of Southeast Asia. In Yemen alone, the Pentagon estimates that the Islamic State’s presence has doubled over the past year. Across the globe, the Islamic State has proven itself skilled at exploiting the erosion or collapse of local government authority and legitimacy, and at appealing to Sunni populations that feel threatened by growing Shia political power. The movement is also continuing to gain energy (and recruits) from the turmoil caused by the ongoing Iranian-Saudi conflict, which today shows no sign of abating and which is instead fueling the destructive war in Yemen.

For most of the past two years, the bulk of U.S. and coalition military efforts against ISIL have been focused on ousting the group from cities under its control. This has frequently required block-to-block fighting by U.S. coalition allies backed by American airpower in scenes reminiscent of World War II combat. For example, in Sirte, Libya, progress in ousting the Islamic State was, for months, measured by the number of city blocks seized by the Misratan militia each day. Similar scenes played out in both Mosul and Raqqa.

In these cities, ISIL adopted a common tactical playbook, which included trapping and using civilians as human shields, cleverly using smoke to mask movements and obscure coalition airpower, destroying key transportation arteries into the cities, using tunnels to move personal and equipment, deploying suicide car bombs, and concentrating its forces in heavily booby-trapped buildings. Taken together, these tactics contributed to fights that devastated local infrastructure and triggered a wave of refugees—many of whom have yet to return home. It’s clear the Islamic State recognizes the utility of operating in cities, so U.S. policymakers and their coalition allies should expect more of that in the future.

In light of recent setbacks, ISIL fighters are increasingly focusing on suicide attacks and hit-and-run operations, and are avoiding large-scale battles with coalition forces. On 19 February, ISIL fighters ambushed a Shia militia group near Hawija, Iraq, the deadliest such attack since Hawija was wrested from ISIL control last October. In recent months, ISIL has used drones to target U.S. and coalition forces operating near both Raqqa and Mosul, reflecting the group’s intent to inflict as much harm as possible on its enemies while minimizing its own casualties. And in January, the group’s media wing announced that the group last year had conducted nearly 800 suicide attacks in Iraq and Syria, strongly suggesting that its leaders view this tactic as their best battlefield option for the foreseeable future.

In recent months, the group’s public messaging campaign has, for obvious reasons, abandoned its emphasis on the physical caliphate and the religious obligation of Muslims to support it, Instead, it focuses almost exclusively on military conflict. As Charlie Winter wrote late last year in Wired UK, “92 percent of the group’s propaganda now revolves around war, and war alone.” The Islamic State’s desire to inspire as many lone wolf attacks around the world as possible dramatically increases the burden on governments and the private sector to identify ways to monitor those susceptible to the jihadist group’s new pitch, stay ahead of the Islamic State’s shifting online messaging efforts (which are not bound by the cyber norms followed by state actors), and develop effective counter-radicalization strategies.

Because of the Islamic State’s notoriety, it’s easy to focus only on the group’s strengths. But, in reality, the group continues to suffer from many of the same shortcomings that have plagued the group since its creation in Iraq more than a decade ago. On the battlefield, the Islamic State has never found an effective way to counter U.S. and coalition air power, which has undercut its ability to mass forces and concentrate resources. In terms of governance, the Islamic State has demonstrated administrative skill when in control of territory, but it’s primarily adept at extracting natural resources and exploiting existing businesses and has proven far less capable of actually creating anything. In its branding, the Islamic State’s reliance on extreme violence, including in its propaganda videos showing bloody footage from attacks claimed by ISIL, continues to alienate virtually the entire Muslim community. And in its leadership approach, the Islamic State’s practice of entrusting only high-level foreign fighters with key leadership positions (a pattern practiced by Abu Musab al-Zarqawi in Iraq more than a decade ago) continues to alienate local communities. A common complaint expressed by disillusioned recruits is that the Islamic State goes to great lengths to protect its leaders while allowing local residents and ill-trained, low-level foreign volunteers to bear the brunt of the fighting.

As ISIL seized control of large parts of Syria and Iraq three years ago, it became commonplace in the West to bemoan a lack of reliable military partners on the ground. Indeed, I participated in numerous White House meetings and congressional hearings at the time in which the level of frustration with America’s lack of credible military partners was unmistakable. It’s certainly true that in the summer of 2014, the Iraqi military largely melted away in the face of ISIL’s offensive, largely owing to the dysfunctional leadership it had experienced in the preceding years under Prime Minister Nouri al-Maliki. But it’s also true that with intensive U.S. military training, including by forward based U.S. special operations forces, increased U.S. close air support, and vastly improved political and military leadership in Baghdad, the Iraqi armed forces (particularly its special operations forces) performed admirably and played a critical role in driving ISIL from the territory it once held in Iraq.

Similarly, in Syria, the Syrian Democratic Forces (the U.S. backed coalition of Kurdish and Arab fighters) deserve great credit for driving ISIL out of thousands of square miles of territory it once claimed. The Syrian Democratic Forces also played a lead role in assaulting the capital of ISIL’s caliphate, Raqqa. While there is no doubt that the U.S. military’s assistance, especially through close air support, in both Iraq and Syria underpinned the success of both the Iraqi military and the Syrian Democratic Forces, it’s clear that local forces did a lot of the fighting and dying, and that they proved up to the challenge when properly led and supported.

While the U.S.-led counter-ISIL coalition is more than 70 nations strong, it’s also true that from the beginning of the conflict several major countries have pursued divergent agendas. For example, Ankara’s ongoing military operations against the Kurdish enclave in Afrin, in northwestern Syria, is threatening to derail Kurdish support for the broader counter-ISIL campaign. And while Russia purportedly entered the Syrian conflict in 2015 to target ISIL, it has spent most of its energy in Syria in combatting other groups who oppose Bashar al-Assad’s regime. So, while many of the countries fighting in Syria and Iraq, including Iran, are genuinely worried about the danger ISIL poses and the broader extremist threat, it’s also apparent that they are pursuing their own self-interests in such a way that has often trumped cooperation against ISIL when necessary.

From nearly a standing start in 2014, the U.S. policy community organized an integrated strategy that laid the groundwork for the successful counter-ISIL campaign of the past three years. Central to that effort was the appointment of a special envoy to help organize this effort, currently veteran diplomat Brett McGurk, who became the government’s focal point and chief interlocutor with the counter-ISIL coalition. In my view, the special envoy’s efforts have been critical in focusing the inter-agency on core military and diplomatic requirements, and in presenting a unified message to America’s coalition partners. There are rumors floating around Washington that this special envoy position may be eliminated soon, but, in my view, it’s vital that there remain one central entity and official charged with coordinating all of the U.S. government’s (and the coalition’s) disparate counter-ISIL efforts. The progress achieved in recent years in formulating a unified response to the threat of the Islamic State has been remarkable, and U.S. policymakers may want to proceed cautiously in altering an approach that has worked so well.

Given the rapid progress America and its partners have achieved in eliminating the Islamic State’s physical caliphate, it would be easy to believe that this fight is winding down. Indeed, a decision to shift America’s military focus from the Islamic State would be understandable given the North Korean standoff and the deteriorating situation in Afghanistan. But while ISIL is clearly on its heels, it remains a wily and determined foe capable of inflicting grievous harm if given the chance, and of reconstituting itself if the underlying conditions that fueled its rise are not addressed. If nothing else, the past three years should have taught U.S. policymakers that there is no single solution to defeating the Islamic State, and that what’s required is a multi-pronged, multi-year campaign with several key elements. First, to maintain steady military pressure on ISIL remnants in both Iraq and Syria. Second, to prioritize the fight against the Islamic State’s most important nodes, especially in the Sinai and Libya. Third, to increase financial investment and loans to help rebuild shattered communities (especially vulnerable Sunni ones) in Iraq and Syria. Fourth, to expand diplomatic efforts to help reduce Iran-Saudi tensions, especially by reaching an agreement to help resolve their proxy conflict in Yemen. And finally, to increase cooperation between the U.S. government and the private sector to counter online radicalization.

In the end, perhaps the most important lesson of the past three years of this fight is that while America and its coalition allies have made remarkable progress against ISIL, there is still considerable work left to do.