You are here: Home / Europe / 10 Syrians pretending to be Ukrainian volleyball team were arrested in Greece 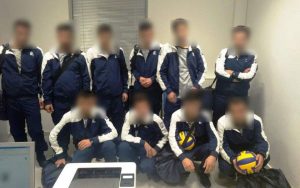 The Greek police arrested ten Syrian migrants who were disguised as the Ukrainian volleyball team as Ekathimerini reported.

According to the police, the men wore similar gym clothes and had similar sports bags and two volleyballs.

The police figured out after the questioning that the men are not the volleyball team. They were detained and passed to the investigating judge for serving charges in the attempt of the illegal leaving of the country with the use of the stolen or lost documents.

Related: Over 1,000 illegal migrants spotted in Kyiv this spring
According to the police, the men planned to enter another EU country, which was not named.

Earlier Germany stated that in some cases, refugees, who came to Germany, might be revoked of their status, and so they will be expelled from the country.

As we reported the European Union provided asylum to 32,700 citizens from North Africa and the Middle East as part of the European resettlement program for particularly vulnerable categories of refugees