You are here: Home / Mediterranean / 10 Egyptian soldiers killed and wounded by Daesh in Sinai 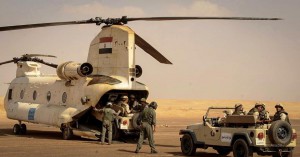 In a statement posted on Twitter, Wilayat Sinai said that its members set up an ambush and targeted the soldiers’ vehicles with light and moderate weapons in the city of Rafah, killing and wounding at least ten.

They added that an ambulance carrying wounded army members to hospital was also targeted.

Earlier to this, Anadolu reported a security source in northern Sinai saying that seven Egyptian soldiers were killed by an unknown armed group.

Based on Anadolu’s statistics, Wilayat Sinai has carried out approximately 63 attacks on the Egyptian army, police, judges and international peacekeepers in Sinai. It also claimed responsibility for downing the Russian plane and killing the 224 passengers on board last October.