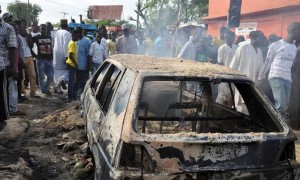 Ten people were killed at a market in northeast Nigeria on Tuesday when a girl thought to be aged just 12 detonated explosives she was carrying, a relative of one of the injured victims and a health worker told AFP.

The blast happened at about 11:00 am (1000 GMT) at the weekly market in Wagir, in the Gujba district south of the Yobe state capital Damaturu.

“It was a suicide attack by a girl of around 12 years,” said Hussaini Aisami, whose relative was among at least 30 people injured by the blast.

“She went into the market and headed straight to the grain section. She detonated her explosives in the middle of traders and customers.

“Ten people died from the explosion. We brought 30 people to the hospital,” said Aisami.

Tuesday’s attack bore all the hallmarks of Boko Haram Islamists, who have used young women and girls in the past as human bombs and regularly attacked “soft” civilian targets such as markets.

On Monday, a girl thought to be aged about 17 killed at least 20 at a bus station near a fish market in the Borno state capital, Maiduguri, when the explosives she was carrying went off.

A girl about the same age was also killed nearby when she blew up but there were no other casualties.

Security analysts studying the phenomenon have suggested that younger girls may have their explosives detonated remotely by a third party.

The injured from Wagir were taken to the Sani Abachi Specialist Hospital in Damaturu for treatment but others with less serious injuries were released.

A nurse at the hospital, who asked not to be named because he is not authorised to speak to the media, confirmed Aisami’s account after speaking to other relatives.

“We received 30 people with various grievous injuries from Wagir this afternoon. We have not received any dead bodies. Residents from the village said the dead were taken out for burial from the scene after the blast at the market ,” the nurse said.

The latest deaths are another reminder of the threat posed by Boko Haram, despite the group being pushed out of captured territory by a four-nation military offensive since February.

Suicide attacks, raids and shelling have increased since new President Muhammadu Buhari took power on May 29 vowing to crush the militants.

In all, some 208 people have been killed since then, according to AFP reporting.