You are here: Home / West Asia / 10 Daesh fighters dead in clash in Philippines 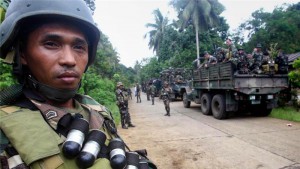 At least 10 members of a Daesh-linked militant group have been killed in clashes with government forces in the Philippines’ troubled south, according to the military Monday.

Maj. Filemon Tan Jr., Western Mindanao Command spokesman, had earlier said that three soldiers were killed in heavy fighting that broke out Saturday morning in Patikul town in the island province of Sulu — a known stronghold of the Abu Sayyaf.

In a statement Monday, Tan said that the clash, which lasted nearly two hours, left 10 Abu Sayyaf members dead and six others wounded — figures he said were confirmed by intelligence units on the ground and validated by civilians in the area.

“Troops continue to conduct pursuit operations and intensify further the conduct of focused military operations to rescue the remaining kidnap victims and neutralize the Abu Sayyaf group in Sulu,” he added.

A total of 21 soldiers sustained injuries — the majority minor shrapnel wounds — in the fighting.

According to the military, the militants involved were under the command of notorious Abu Sayyaf leader Radullan Sahiron, who has a $1 million bounty on his head for alleged involvement in the kidnapping of U.S. tourists in 2001.

The armed forces have been engaged in intensified operations against the Abu Sayyaf since August under orders issued by President Rodrigo Duterte after the group beheaded an 18-year-old Filipino hostage.

Police and military reports released in October stated that the group made around 353 million pesos ($7.3 million) from kidnap-for-ransom activities in the first six months of this year.

Since 1991, the group — armed with mostly improvised explosive devices, mortars and automatic rifles — has carried out bombings, kidnappings, assassinations and extortion in a self-determined fight for an independent province in the Philippines.

It is one of two militant groups in the south to have pledged allegiance to Daesh, prompting fears during the stalling of a peace process between the government and the country’s one-time largest Moro rebel group that it could make inroads in a region torn by decades of armed conflict.