You are here: Home / Europe / 1 dead, 3 wounded in stabbing at asylum center in Sweden 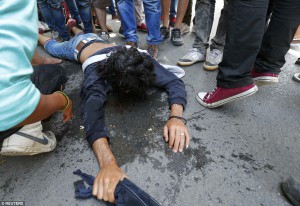 Swedish police say they have arrested a man suspected of killing one person and wounding three others during a fight between asylum-seekers.

Soderhamn Police spokesman Christer Nordstrom said Sunday they are holding a man in his early 20s on suspicion of murder and attempted murder. He said it wasn’t clear what type of weapon was used in the attack but the victim had died from cuts or stab wounds. He said some 15 men were involved in the brawl.

The incident occurred Saturday outside the Ljusne asylum center near Soderhamn, 240 kilometers (150 miles) north of the capital, Stockholm.

Police have reported increased incidents of violence at asylum centers and attacks against migrants in the country that last year received 163,000 asylum-seekers – the highest per capita rate in Europe.