You are here: Home / Africa / ​Somalia fighting not only al-Shabab but Islamic State too

Islamic State is slowly encroaching on al-Shabab territory in Somalia — but can it take root? 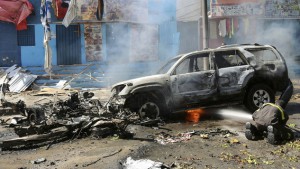 In late October, a faction of Somali militants aligned to Islamic State and led by long-time cleric Abdulkadir Mumin, walked into the town of Qandala along Somalia’s northern coast in the Bari region of Puntland, meeting little resistance. Whether or not they subsequently retreated to the town’s outskirts is unclear, but a naval attack by Puntland’s forces on November 10 confirmed the militants’ continued occupation of the area.

The development is worrying for a number of reasons. It’s the first attempt by militants aligned to Islamic State to hold territory in Somalia, a key criteria for pledged groups such as Mumin’s to gain official acceptance as a full wilayat (province) in Islamic State’s global caliphate.

Second, Qandala’s strategic location is underscored by its proximity to Yemen, and specifically the port city of Al Mukalla, long rumoured to be a source of weapon imports.

The annual United Nations monitoring group report on Somalia recently highlighted the role of illicit weapon flows from Yemen to Somalia, while the former head of Puntland’s intelligence remarked in June that Mumin’s troops had already begun receiving supplies via the Al Mukalla route.

Finally, the occupation of Qandala may demonstrate the ability of Islamic State-aligned militants to leverage Somalia’s notoriously difficult clan system to their advantage. Mumin hails from the Ali Salebaan sub-clan of the Darod/Marjeteen, whose members inhabit the Bari region, and he may utilise these loyalties for support and protection in the wake of security operations by regional authorities.

Mumin pledged allegiance to Islamic State in October last year with just a few dozen militants, breaking off from an al-Shabab cell based in Puntland. This was the first major pledge, but a small, diverse pool of al-Shabab militants throughout Somalia have since followed his lead, making Mumin’s group the most active, but not the sole representation of Islamic State in Somalia.

Al-Shabab has responded violently to this challenge, detaining some members who express loyalty to Islamic State and clashing with others. Shortly after Mumin’s pledge, al-Shabab official Abu Abdalla threatened to “cut the throat” of anyone defecting. And, according to the UN monitoring group, a disastrous seaborne invasion of Puntland by al-Shabab, involving up to 400 militants this past March, was aimed at eliminating Mumin’s faction.

At the same time, Islamic State has made multiple overtures to bring al-Shabab into its fold. In March last year, Islamic State emissary Hamil al-Bushra called for al-Shabab leader Abu Ubaidah to pledge loyalty to the organisation.

One likely source of friction between Islamic State and al-Shabab involves foreign fighters. Al-Shabab has a chequered history when it comes to the treatment of foreign fighters in its ranks — in December last year two captured Somali-Americans admitted the difficulties some non-Somali born members have faced.

More importantly, however, there may be a sense of competition as ethnic Somalis lured by the appeal of jihad have started flocking to Islamic State territories, rather than Somalia itself.

A report from the Soufan Group in 2015 estimated 70 Somalis from the diaspora could be present in Syria and Iraq.

Encountering significant resistance, Islamic State appeared to shift gears away from a leadership focus, and instead has attempted to incite division in al-Shabab. Propaganda has been directed at rank-and-file al-Shabab militants, with messages highlighting al-Shabab’s poor treatment of its members.

Islamic State media outlets also published a series of tributes to prominent defectors, such as Muhammad Makkawi Ibrahim and Hussein Abdi Gedi, who were killed by al-Shabab assassins.

The majority of incidents occurred in and around Mogadishu, but scattered attacks in other places denote a reach beyond the capital city.

Somali security forces also killed Islamic State fighters in Janale in May, while others in Baidoa were sentenced to 10 years in prison in September.

It is unclear if these cells maintain links and function as a cohesive unit or even receive any assistance from Islamic State. More likely, they represent a collection of disparate but ideologically aligned al-Shabab defectors, operating in distinct geographic zones.

Islamic State has concurrently been working to broaden its appeal in East Africa, gaining the allegiance of Jabha East Africa, and another previously unknown group from the Tanga area of Tanzania.

These movements have not, however, demonstrated a presence beyond online statements, calling into question their legitimacy and capacity.

Islamic State also claimed two recent attacks in Kenya, amid a spate of arrests of suspected members. Nonetheless, in neither of the two cases did the assailants demonstrate a long-standing history with the organisation, nor appear to receive direct support or direction.

The extent of Islamic State’s presence has thus far been limited in the region but, as in Somalia, appears to be aimed at enduring and gradually expanding.

Islamic State clearly has a strategic eye on Somalia and perhaps the region, as an important location to advance its global caliphate project. Despite facing resistance from al-Shabab, supporters of Islamic State have made some inroads, as Mumin’s recent escapades in Qandala show.

Nonetheless, Islamic State has yet to officially recognise the actors operating in Somalia as a new wilayat, and their activity thus far pales in comparison to the continued violence of al-Shabab.

The sustained resistance by al-Shabab also ensures Islamic State has an uphill battle to gain greater acceptance in a region where al-Qaeda has had a historic presence.

But the seizure of Qandala and the emergence of violent operations elsewhere show that factions aligned to Islamic State are determined to slowly march up that hill, and may evolve into an expanded threat to Somalia and the region.